You are here: Home

Ethanol produced by Wilmar from molasses produces less than half the C02 emissions of petrol. By using E10 in your cars, you can help reduce the production of greenhouse gases that are causing climate change.

In addition to lower CO2 emissions E10 increases the amount of oxygen used in the fuel combustion process. This means there is a cleaner more efficient burn, which reduces the amount of carbon monoxide emissions.

The potential benefits of a larger biofuels industry in Australia in the future include regional development, reduced air pollution and progress toward achieving fuel security.

Wilmar's ethanol production is a renewable and sustainable process.  When sugarcane is grown and harvested it gets transported to mills by rail.  In the process of producing crystallised sugar, a by product (molasses) is produced.  Molasses then becomes the feedstock to produce ethanol.  Ethanol is sold in many markets including the transport industry.  During the ethanol fermentation process a rich biological waste product is produced called Dunder.  The dunder is collected in dams and is put back on our fields as a fertiliser for sugarcane crops. 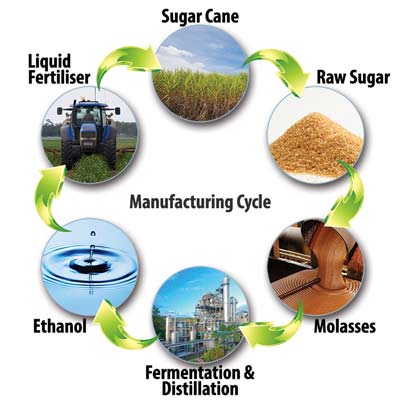